A case history in failings; in preparation, in execution and in understanding but followed by a successful repatriation, sounds boring, but do continue, for a while at least. Maybe we’ll capture your imagination.

Mary Dobson, the artist who later on in her career specialised in stained glass, designed and made the East Window; a thing of beauty, but flawed in execution and so, perhaps the story is worth telling.

The window sections are made of sheets of plate glass with the coloured decoration glued onto it, (applique), but after some twenty years the two were separating. The Trustees were in a quandary and requested Derek Latham, Architects, to find a remedy; which was to call on us to discover “what’d gone wrong”. 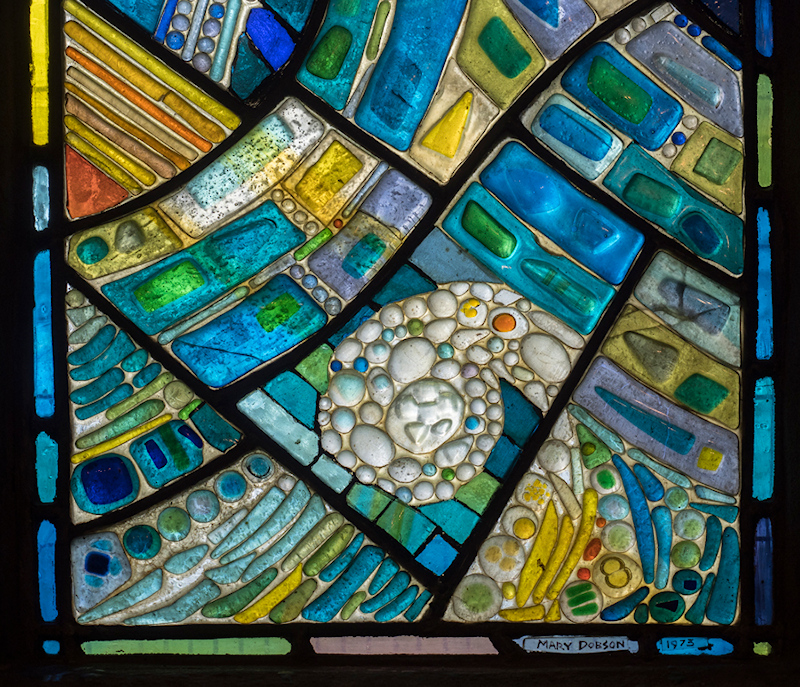 Primarily the problem was one of preparation, both of the host and the coloured pieces for the depictions (tessarae), the most they appeared to have received was to have been washed; it seemed that this, coupled with the use of maybe not the best adhesive, (though it was found to be an epoxy resin), made for eventual trouble.

A fact not perhaps given much thought? The window array is the EAST one so, it would be cold throughout the night and as the sun arose, the temperature could sometimes increase very quickly, so the differences in expansion between main plate, adhesive and small glass pieces would be such that schism was bound to occur (as they say!)

And then? Our being awarded the contract to right the wrong, which was to:

By the way, we’re not speaking ill of the dead! This is a lesson in progress.