Thanks to Benring Ltd, Brantwood, The National Trust and The Rawdon-Smith Trust now benefit from a novel method of restoration to the main post tops on the poles that support the jetties at Coniston Water.

Originally, long-lived European Larch poles were driven into the lake bed to form supports, and the remainder of the jetty then built on these foundations. Larch lasts well underwater, but the carpenters forgot to consider that the tops were open to the weather and rainwater constantly sat on the tops, exposing them to end-grain rotting (would’ve been fine had they placed galvanised, tailored covers over them). The main stems were in good order apart from these topmost sections. It’s a complicated, messy and expensive business to extract the poles, not to be written of here BUT a solution did occur; initially introduced to The National and Brantwood Trusts, we offered to prove the idea by the no-charge fixing of five posts and this was very quickly taken. A finishing touch was to laminate topping-caps to keep the weather at bay. 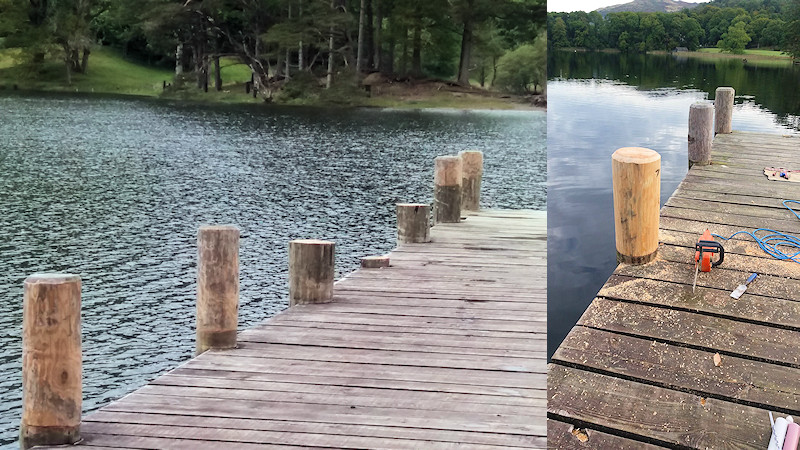 On approval the Trusts mentioned instructed BENRING to carry out the necessary work to the rest of the pole tops: what a wonderful workplace, our visitors reckoned we should pay for the privilege (fat chance of that!).

Browsing of the Brantwood and National Trust web-sites is heartily recommended followed by adding a visit to Coniston Water to your bucket list!

AND, for interest, the way we did the work...

Any one post was chopped through with a chain saw in stages until sound timber was found; three holes were now drilled into the post-top and a thin slip sawn from the clean wood to act as a pattern for the next step. This being to sort through our stock of trunk lengths in order to match diameters, new-to-old, and an appropriate length cut. Using the pattern we now drilled corresponding holes into the replacement and cut BENCON 24 epoxy/glass dowels as connectors. After checking for approximate fit, BENEPOX 40 was applied to holes, dowels and mating faces of post-tops, (this latter, not as an adhesive but as a gasket), and the jigsaw assembled. Following cure the new piece would be fettled to match that in situ. Job done, move to next!